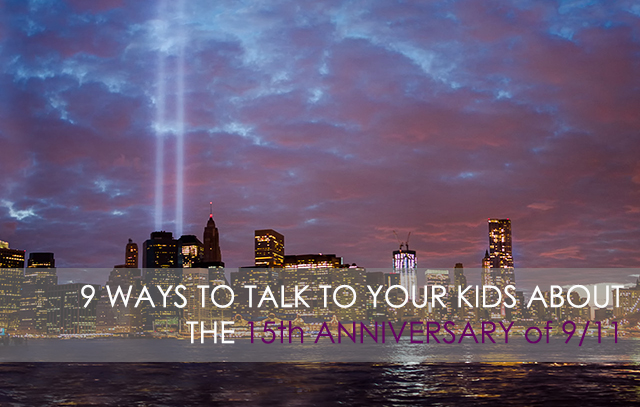 The assassination of John F. Kennedy. The explosion of the Challenger. The terrorist attacks of September 11, 2001. There are few events in our nation’s history that have made an impact on all of us. Like most adults (and even older children and teens), I remember where I was when I first learned about the terrorist attacks of 9/11. I remember the discussion with my daughter, then 11, when she came home from school that day. We spent time discussing what happened, correcting misunderstandings, and talking through her worries and concerns. Much time was spent reassuring her of her safety and mine.

Children and teens have grown up in a world changed forever by these attacks. They have little or no memory of the United States not involved in the wars which followed the attacks. Media coverage of large-scale tragedies, including coverage of anniversaries of such events, can lead to emotional stress for some children and teens. The intensive 15th anniversary coverage of the terrorist attacks of September 11 may produce such distress.

Teenagers may have new questions about these events, particularly in light of recent terrorist attacks around the world. Young children may have questions for the first time as they watch or hear about this important anniversary. As the attacks have resulted in a war that is ongoing, more questions, worries, and new concerns may be raised. Finally, although the mastermind of the attacks, Osama bin Laden, has been killed, new conversations about ISIS and other terrorist organizations have taken his place in discussions about terrorism. Children may strive to understand how these events impact the future.

Parents and other caregivers provide a source of stability, comfort, and love in difficult times. As we reflect, remember, and commemorate the events of September 11, 2001, here are some tips to help your children as you watch coverage and talk to each other about the 9/11 15th anniversary.

Children may have many questions about what they are seeing and hearing related to the events of September 11 and the aftermath. For young children, they may not know what happened, except in large brushstrokes. For teenagers, they have grown up with 9/11 being a central part of their history.

Many young children at the time of the attacks are now young adults. Parents should reach out to them as well. Just because they may no longer live at home does not mean they would not benefit from your support and an opportunity to talk about this event and what it means to them.

As you talk about this anniversary, also discuss where we are as a nation. Discuss how we can commemorate and continue to move forward, together. Our nation continues to change. As we reflect on this 15th anniversary, consider what beliefs and values about how we treat others you wish to share with your children and teens. Consider how hatred was the impetus for the terrorist attacks and discuss how you would like to see this change in today’s world.

As you talk about the events of 9/11, remembering and commemorating this anniversary, assure children of all ages about what is being done to keep our country safe from future attacks. Take this opportunity to talk about your family’s emergency plans (or to make a plan), assuring them that in a crisis, your primary concern will be their safety and protection.

Although it has been 15 years, the events of 9/11 changed our nation and the world. With the intensive coverage and discussion of the September 11th events and the anniversary, some children, may have increased distress.

Stress, as we think back to the events 15 years ago, not only affects our children, but it affects adults, too. We need to be a little more patient with ourselves and with our children. Children are masters at reading our moods and our distress. It is ok to share with them, at a level they can understand, our memories, and our progress for ourselves and for our country. A little extra attention, particularly when they do something well (e.g., chores, homework, get along with siblings) will also go a long way.

When I reflect on 9/11, I remember reaching out to my family and friends, both near and far. I know this was true for most of us. Children and teens feel most secure and are most resilient when they have connections with others. One of the best connections is a strong bond with you.

The deluge of images that will be replayed as the media marks the 15th anniversary of the 9/11 terrorist attacks can easily overwhelm children and teens, especially younger children.

Use the events depicted on the news as a platform from which to teach the importance of compassion and charity.

No matter what else is happening in the world, routine is important to children of any age. They need the opportunity to play and to interact with other children. Friendships in the teen years are extremely important to their development; incorporating opportunities to spend time with friends into weekly routines can build important connections. Routine is important in the classroom and at home. Routine helps to provide a sense of stability for children, a feeling important after a crisis occurs or as they watch news about a crisis event.

All children gain a sense of control, security, and empathy when they help others, and in the midst of crisis, they really can emerge as active agents of positive change. Encourage them to help support local charities and crisis relief efforts as you remember, reflect, and commemorate the 15th anniversary of September 11. Or better yet, join them in doing so! Communities, faith-based organizations, and national charities often sponsor activities for families to become a part of the giving. Be a role model. Discuss together how these activities can make a difference.

In the aftermath of September 11, thousands of children lost a parent. In the years since, more parents have died who may have helped in some way on that fateful day and in the weeks afterward. These children have grown up “in the shadow” of 9/11. Their traumatic loss was a national loss. Their grief, a shared grief. Yet, they also needed to grieve their loved ones, out of the public eye. They needed to cope and to adjust to life without a parent. There are no “rules” of how to do this. Goals, choices, and world views may have been significantly shaped by 9/11. Take time to discuss these. Guilt about actions taken or not taken are common in the aftermath of traumatic deaths. Hopefully, children directly impacted by the attacks have had support to cope with any reactions, their grief, and guilt.

Many children had parents who were also changed forever by their involvement in the aftermath of the terrorist attacks. For all of these children and adolescents, 9/11 has also shaped who they have become and goals they may set for their future. As the anniversary is covered, and stories and images repeated, these adolescents and young adults may experience stress reactions as before, but this time, hopefully, with support from loved ones, it will not be as difficult.

I think about my friend, an EMS responder in NYC. She gave her all at Ground Zero, and continued to do so. She also worked to help her two young children cope with the aftermath of these events. Like others, health concerns have developed. Like others, anniversaries bring memories. Like others, she also takes time to hug her children a bit more and to reflect on changes and progress over the years. She shares her story. She is one of thousands whose lives changed on 9/11. I thank her for what she did and I commend her for where she is now.

After a traumatic event, many, particularly those impacted, strive to make meaning of the tragedy. Following 9/11, thousands of children had a parent killed or injured. More have experienced life changes due to the terrorist attacks. Over two million children have experienced parental deployment(s). Consider with your children, teens, and young adults how they have made meaning of what happened. How has their “life narrative” changed? For example, a son of a first responder killed in 9/11, pursued a career like his father and is now a first responder. Meaning making is unique for each person, but it can be an important part of the healing process.

For those directly impacted by the terrorist attacks, know that services remain available for families. Never be afraid or embarrassed to reach out—they can make an important difference (even 15 years later). For families who received services, know that this anniversary may bring up thoughts and feelings that seemed to have been resolved. This is common. It is ok to reach out again for support. This anniversary may also give rise to renewed commitments, strengths, hopes, and dreams for a brighter future ahead.

As I write, I have many emotions and thoughts that rise to the surface. These attacks changed me and I acknowledge these changes. I became part of the National Child Traumatic Stress Network and reaffirmed my involvement in the American Red Cross and the American Psychological Association’s Disaster Response Network. I shifted much of my professional work to focus on how to improve family relationships in our military families coping with deployments and renewed my resolve to support our understanding of how disasters, including the impact of terrorism on children. I made new friendships that have lasted for 15 years. Finally, on this 15th Anniversary, I will FaceTime with my daughter. I will reach out to family and friends near and far. I will reach out to say, “I love you” and “I’m glad to have you as a part of my life.” Together, we will reflect on where we were and where we have come. And, we will talk about what we hope for our future.

Dr. Robin Gurwitch has been involved in understanding the impact of terrorism and disasters on children since the 1995 bombing in Oklahoma City, providing direct service, training, and conducting research. She is a member of the APA Disaster Resource Network, American Red Cross, and the National Child Traumatic Stress Network. Dr. Gurwitch was recently appointed to the HHS National Advisory Committee on Children and Disasters.