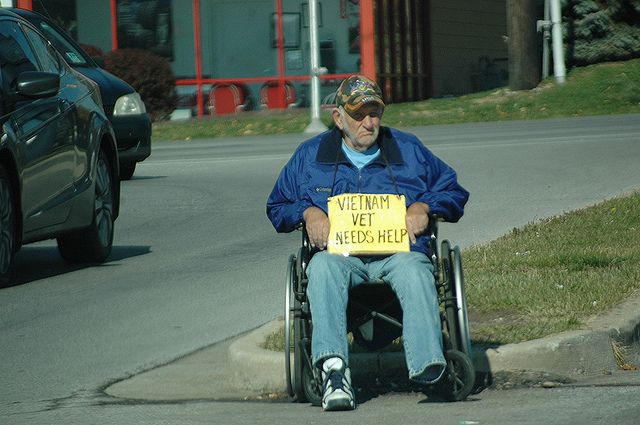 “As we express our gratitude, we must never forget that the highest appreciation is not to utter words, but to live by them.” —John F. Kennedy

On Veterans Day we honor those who have served our country. With the recent conflicts in the Middle East and other parts of the world, we have primarily focused our attention on reintegration issues and homelessness of returning younger veterans. Although all veterans should be honored for their service, we mustn’t overlook older homeless veterans.

Our older veterans served in historical conflicts that irrevocably shaped our growth as a nation, including World War II, the Korean War, and the Vietnam War. Our nation should commit to caring, as well as honoring, older veterans as a testament to the sacrifices they made on our behalf.

The older veterans absent from today’s public ceremonies most likely include those who are homeless or at-risk of being homeless. Our analysis of the Department of Veterans Affairs (VA) Homeless Operations Management System gives a conservative estimate of over 46,000 veterans aged 55 or over who used VA homeless services in 2011 and 2012. However, the true number is much larger as this estimate excludes those who used services for the homeless outside of the VA health care system.

The VA has committed to ending homelessness among veterans of all ages by the end of 2015. At present, the VA offers an array of services including subsidized housing and case management, transitional and rapid rehousing interventions, dental, mental and physical healthcare, jail diversion, and prison re-entry programs. Serving homeless veterans returning from conflicts in the Middle East has been a priority, but there are growing concerns about the rapidly aging veteran population who are at risk of being homeless or are already homeless.

Even though the VA offers these specialized services, older homeless veterans have a higher risk of mortality than the general population. While we know that homeless people risk infection or contagious disease, exposure to the elements, injury, and malnutrition, older homeless veterans bear the brunt of the combined effects of age-related health conditions and diminished socioeconomic status.

Source: Contents of chart originally presented in the Veteran Supplementary Report to the 2010 Annual Homeless Assessment Report to Congress

However, older veterans are generally at lower risk for homelessness than younger veterans because of benefits like social security and Medicare. We should pay special attention to older veterans who remain homeless despite being eligible for various sources of government support. Research indicates that they differ from younger homeless veterans in notable ways:

The veteran population is rapidly aging. Despite available VA supportive services and benefits, a notable portion are at risk for homelessness or are already homeless. The VA is a great resource to help homeless veterans and the providers serving them to access the services they need. We may need to pay special attention to chronic medical conditions, psychiatric disorders, and suicide when serving older homeless veterans.

What You Can Do

You don’t need to work at the VA to help an older homeless veteran. Here are three steps you can take:

Dr. Tsai is a Clinical Psychologist at the VA Connecticut Healthcare System and Assistant Professor of Psychiatry at the Yale University School of Medicine. He is also affiliated with the National Center for Homelessness Among Veterans and funded by the VA Health Services Research & Development service. He is nationally recognized for his work on homelessness, severe mental illness, posttraumatic stress disorder, and health services and disparities.

Dr. Brown is a Clinical Psychologist and Associate Professor at the University of South Florida. She is also Director of Training and Development for the Veterans Administration HSR&D Center of Innovation on Disability and Rehabilitation Research (CINDRR), Tampa, Florida. She is funded by the National Center for Homelessness Among Veterans and the National Institute on Aging. Her research focus is on trauma, resilience, vulnerable populations, and aging.