I’m sure you’ve heard it – only “relevant” facts should be considered in the courtroom. After all, it’s the foundation of the United States’ justice system to create a just and fair trial. Over the past several months, my Twitter and Facebook newsfeeds have overflowed with posts about race and the justice system following grand jury rulings to not indict in the cases involving police killings of unarmed Black men. Some say “facts are facts.”  Others say there was something more.

Maybe… there was. Research tells us that facts not “relevant” to a given case impact jurors’ decisions – these are called extralegal factors and range from personal characteristics like race or gender to how a juror sees others. Scientific data show, for example, Blacks are treated the worst in criminal and civil cases. Studies also show jurors’ biases about race may have something to do with their decisions –that is, their verdict.  Yet, researchers don’t quite agree. For example, some find better outcomes if the jury is made up of people of the same race as the defendant, while others don’t find these racial biases. An emerging area of study on race salience says decisions may be related to how “obvious” racial issues are in trials, not necessarily about race of jurors.

But this work is somewhat limited too.

People’s subconscious ideas and prejudices about social-demographic race are referred to as racial identity attitudes. It is this “thinking” that impacts how people make sense of the world – regardless of how they answer that “what is your race?” question. For example, you can ask me what race I am, but my answer won’t tell you whether I am racist or not.

How does it enter the courtroom?

We did a study with 210 mock jurors who were African American, Hispanic, Asian/Pacific Islander, or non-Hispanic White (henceforth, White). Participants read a case of workplace discrimination and asked whether the plaintiff (African American) had been discriminated by their employer (no race information provided) and if the facts supported that the plaintiff had suffered emotional distress. We included obvious racial overtones in the case (e.g., plaintiff alleged employer used derogatory racial terms such as “coon” or “spook”).

Most participants found the plaintiff was discriminated and suffered emotional distress. However, it depended on “who” and their “thoughts” about race.

We looked at decisions by juror’s socio-demographic race (that is, the “what is your race?” question):

African-American and Asian-American jurors said yes. White mock jurors were the highest proportion of those who did not agree.

White jurors only supported a hostile work environment. Research on race salience suggests Whites may want to appear impartial (that is, not bias) when there are obvious racial overtones in a case.  Our findings seem to support this notion somewhat since they didn’t support both decisions.  Based on a common perception that race is much more important for racial/ethnic minorities, we expected people of color to support the plaintiff in both decisions. However, we found racial bias by minority racial/ethnic groups as well. This is important because most research on jury decisions tends to focus on unequal treatment of Blacks only by Whites.

We also looked at what jurors “think” about race (i.e., their racial identity attitudes) and found three attitudes related to their decisions – don’t forget these are often out of people’s awareness. If you look at the graph, we show what research says is the progression of people’s attitudes with respect to race. 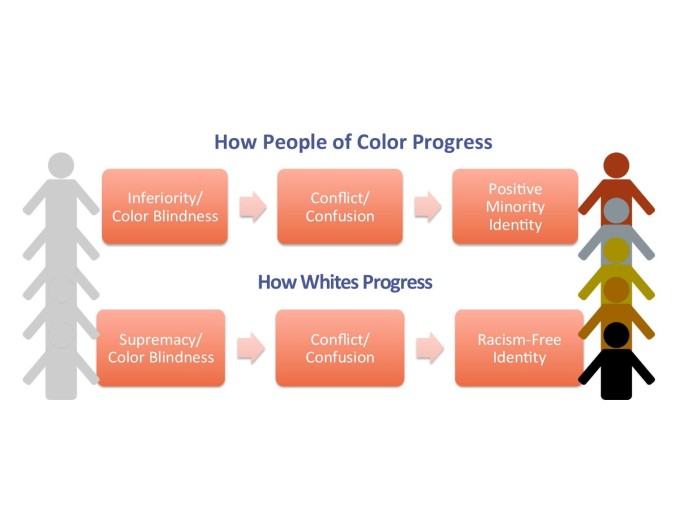 “We are all humans”: We found attitudes that negate the importance of race in people’s lives resulted in African-Americans’ finding that experiences of discrimination are irrelevant or unimportant facts of a case. These attitudes are driven by internalized beliefs about the inferiority of people of color. Therefore, its possible they may have thought the plaintiff deserved the consequences — even being called blatant derogatory terms.  For White jurors, on the other hand, these attitudes resulted in supporting both decisions.  It is possible that these attitudes may help them see that a Black person was harmed by a hostile work environment, whether or not it had anything to do specifically with race.

“I’m all about my ‘racial/cultural’ group”: For people of color, these attitudes sometimes include connecting more with other racial/ethnic minorities and can increase awareness of issues of race. Therefore, it’s possible that Hispanic and Asian-American jurors were more sensitive to see potential for emotional harm – even though they did not think it was a hostile work environment. For White jurors, these attitudes reflect the first step toward questioning notions of supremacy. Maybe immersing themselves in their racial group and beginning the process of questioning supremacy prevented them from seeing that experiences of racial discrimination were relevant or that they can cause emotional distress.

“I accept and value me, and others”: These attitudes are the most mature of racial identity beliefs. They reflect a person who has come to integrate race and culture into who they are as people, resolved conflict related to racial differences, and able to value themselves as racial beings. We found African-American jurors were less likely to support there was discrimination. It’s possible that they judged the facts of the case based on its merits without including subconscious prejudices related to race.

First, most research neglects to examine racial bias of racial/ethnic minority groups. We, however, found racial bias was present among minority jurors as well. Second, looking at the sociodemographic race of jurors (e.g., the “what is your race?” question) doesn’t really tap into racial biases or attitudes. Had we only looked at sociodemographic race, we would not have seen the wide range of decisions within each racial/ethnic group. In other words – race as a social demographic factor would not identify biased jurors.

It seems that decisions from jurors are based on more than just facts.  This finding calls for urgent attention from all of us – it would mean a fair and just criminal justice system is somewhat of a myth.  So what do we do?

What the justice system can do:

Include psychological measures of racial identity “attitudes” to determine juror bias – and use these with all racial groups not just Whites. Theories on racism show people tend to present themselves as fair. So, simply asking jurors if they think they will be unbiased, as with typical legal strategies used to identify racial bias, such as challenge for cause or voir dire, – doesn’t necessarily identify those who may or may not be.

What you can do personally:

The truth is that racism is everywhere – we all, in one way or another, grew up learning about the ‘good’ vs. the ‘bad’ racial groups. It is our responsibility as people to change the way we have been taught to think about race so that our justice system really is fair and just, and our children can have a better and more just future! Here are some ideas:

Until we stop seeing race as an issue of Whites against Blacks, or all people of color, and start looking at the meaning of race and how we have all been socialized within systems that value whiteness, we cannot move forward.

We need to support discussions about the “meaning of race”. It takes courage to talk about the privileges we’ve been given just because of “how we look”. Let’s support these conversations.

Talking about race, whether you are “perceived to be” the oppressor or the oppressed is taxing to our emotional wellbeing. I, for example, have been feeling so many different emotions with all the current attention to issues of racism in the media. If I, as someone who studies, works and writes about race needs somewhere to talk about my feelings, you may too. It’s ok. And it’s needed!

We want to hear from you – Tell us in the comments:

Dr. Mazzula is also the Executive Director of the Latina Researchers Network and former President of the Latino Psychological Association of New Jersey. Check out Dr. Mazzula’s previous blog post on how microaggressions affect the Latino community.