We’re bombarded these days with information about how to prevent aging. Since when did aging become our enemy? Like any part of one’s demographics, age has its upsides and downsides, but somehow it’s permissible to explicitly state our dislike of getting older while similar statements about gender, race, or sexual orientation would generate an outcry of righteous fury. Yet we have greeting cards poking fun of older adults, and ageist jokes abound in almost all settings. 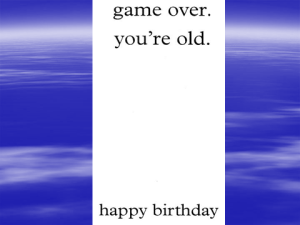 As a geropsychologist, I’ve even bought some of these to give to family, regretting my purchase only after the fact.

May is Older Americans month. Perhaps this is a good time to reflect upon ingrained ageism.

So how do we become aware of ageist attitudes and what can we do about it?

1. Raise your hand and become self-aware.

You earned those wrinkles from years of laughter, crying, and inquisitive looks upon learning new information. Research suggests that older adults actually outperform their younger counterparts in crystallized intelligence (knowledge gained from past experiences). Celebrate your history and focus on the positive.

Listen for unintentional ageism among family, friends, and your colleagues at work. Many of us have made subtle and unintentionally offensive comments to others. These microaggressions manifest in both health care settings and the workplace, and can have deleterious effects on (older) adults’ physical and mental health. Listen for these statements to help recognize them. Practice makes perfect!

Ageism is not a sin. Forgive yourself and others for holding ageist attitudes and beliefs. As you practice listening for unintentional ageism, consider how you might wish to respond. Below is a list of myths vs. facts about aging to help clarify common misconceptions.

Be curious about aging! We can choose to prevent the look of wrinkles while still embracing what they represent. The more we know about aging the more empowered we’ll feel and the healthier we’ll become!

Stay tuned for more… in the coming months, the APA Committee on Aging plans to partner with others to generate a series of posts related to diverse aspects of aging!

UPDATE: The first new post in the series focuses on elder abuse. Find it here.

Additional resources on aging and ageism:

APA Monitor on Psychology article – Speaking up against ageism

Kimberly Hiroto, PhD, is a Clinical Geropsychologist working at the American Lake VA in the Home Based Primary Care program. She served as the early career psychologist on the Task Force to update the APA Guidelines for Psychological Practice with Older Adults, and more recently serves as the early career psychologist on the APA Committee on Aging and co-chairs the APA Presidential Initiative on Patient Centered Medical Homes.