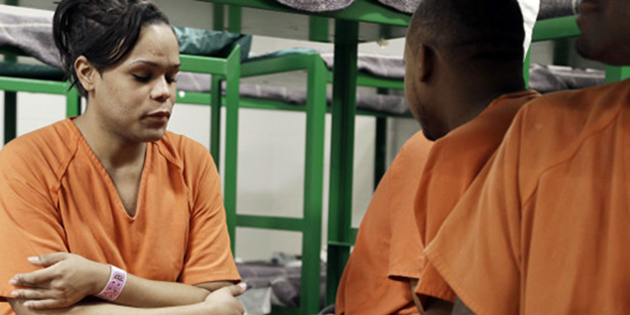 Zahara Green is a 25-year-old transgender woman who was placed in an all-male prison in May 2012. According to Green, she was targeted by another inmate, Darryl Ricard, immediately upon entering general population at Rogers State Prison in Georgia. Ricard was serving a life sentence for aggravated child molestation, rape, and kidnapping. After Ricard repeatedly assaulted her, Green was granted protective custody in September 2012. Far from being protected, Green was placed in a cell along with Ricard where he raped her. Although security checks were supposed to be made every 30 minutes, Green remained locked in the cell with her assailant for almost 24 hours. A lawsuit is currently in place citing official misconduct in the treatment of Green.

Unfortunately, Green’s story is all too familiar for those who work with incarcerated transgender individuals. Valerie Jenness, Dean of Social Ecology and Professor of Criminology at UC Irvine, is a leading expert in the field of prison violence against transgender inmates. Her research has found that the incidence rate for sexual assault against transgender inmates is 13 times higher than their cisgender (non-transgender) counterparts (Jenness, Maxson, Matsuda, & Sumner, 2007).

Why are transgender inmates at such heightened risk? The reliance on gender binaries (i.e., male and female prisons) and assumption of cissexuality, where one’s gender identity matches the gender assigned at birth, permeate our prison system and society in general. As a result transgender and other gender nonconforming individuals are pathologized and viewed as deviant. This marginalization continues in the prison system, where transgender inmates face persistent harassment, assault, humiliation, and denial of care.

The false assumption that gender is binary and cisnormative (i.e., the presumption that any given person identifies with the gender assigned to them at birth) has informed prison placement protocols for decades. This lands the majority of transgender inmates in prisons based on their genitalia instead of their gender identity. Once inside the prison system, binary gender roles are strictly enforced and any gender variance or nonconformity is punished.

Transmen have been forced to wear dresses and transwomen have been denied access to bras, even despite having fully formed breasts in some cases. These practices contribute to the harassment, assault, and humiliation of transgender inmates. Prison officials have even been known to facilitate assaults on transgender inmates in order to assert dominance and reinforce control (Sylvia Rivera Law Project, 2007).

In order to combat what many consider a gross human rights violation, the Prison Rape Elimination Act (PREA) went into effect in 2012. PREA is the first federal legislation to address rape and sexual violence in the U.S. prison system (Stop Prison Rape, 2007). The Act specified policy changes regarding how transgender inmates should be treated and housed, including:

Unfortunately, despite stating zero-tolerance for sexual assault, PREA does not have much bite behind its bark. Correctional agencies are not required to sanction staff who violate PREA standards, and state and local facilities can opt to forgo five percent of their federal funding and remain non-compliant. Thanks to lobbying efforts, non-compliant private prisons are exempt from any financial penalty (National Prison Rape Elimination Commission, 2009). Many advocates argue that PREA places cost considerations above effectively combating prison rape.

The normalization of violence against transgender inmates, including deliberate indifference to their suffering, arguably constitutes institutional corruption and violates the Eighth Amendment’s protection against cruel and unusual punishment. If the true measure of a society is how it treats its most vulnerable, then the stories of Zahara Green and other transgender inmates are truly damning. PREA represents one step in addressing the ubiquitous problem of transgender victimization, but there is still much work to be done.

To learn more and get involved, visit:

You may also want to watch the insightful 2006 documentary, “Cruel and Unusual: Transgender Women in Prison.” A clip from the film is below:

Sabrina Cox is a Licensed Master Social Worker with a second master’s in Psychology. She is interested in issues concerning lesbian, gay, transgender, queer, and questioning (LGBTQ) people, with a particular focus on bisexual and transgender individuals. For over a decade Ms. Cox has worked with LGBTQ populations in community, clinical, and research settings, and considers herself a passionate advocate for social justice. She has been published by the Journal of Bisexuality, and her work was selected for the journal’s Editor’s Choice Article Collection.