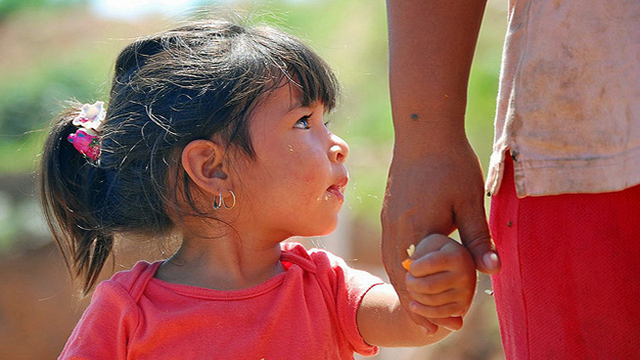 When you think of the psychological harm that incarceration can cause, what is the first picture that comes to mind?

Did you think about an 11-year-old boy who began to wet his bed after being held in a detention facility with his mom for 24 hours?

Or a 16-year-old girl who says she will never be able to trust again?

Or is the first image that popped in your head that of an 8-year-old girl who has regressed to breast-feeding from her mom?

These are just a few of the personal accounts of immigrant detainees shared by Luis Zayas, PhD, a psychologist and Dean of the University of Texas, School of Social Work. Dr. Zayas interviewed more than 45 children and parents in Immigration and Customs Enforcement (ICE) family detention facilities in Dilley and Karnes City, Texas. While these are not the first thoughts that come to mind for most people, sadly, these types of stories are too common amongst the 1,300 detained mothers and children trapped in confined uncertainty at these facilities.

Simply put, the time has come to stop the harm and discontinue detention-first policies for undocumented immigrant families. Psychological evidence has long documented the deleterious effects that imprisonment can have on mental health and it is incumbent upon us as a field to use that knowledge to protect innocent children and advocate against ICE’s use of family detention facilities. Moreover, these family detention tragedies are unnecessary and fiscally irresponsible; there are far better approaches to address these immigration issues.

While the Obama Administration and the judicial branch have taken positive steps to address this humanitarian issue, the reported conditions at these facilities are extremely troubling and can lead to further trauma for immigrant families, many of whom are refugees fleeing violence. Even under the best of circumstances, these facilities are incapable of adequately mitigating the stressors and feelings of helplessness that confinement brings for children and families.

It is not enough for psychologists to sit back and treat patients of immigrant-origin from the comfort of our offices. We should redouble our social justice efforts to prevent their incarceration-induced traumas from occurring in the first place. This is why I am proud APA has repeatedly stood against the expansion of family detention facilities and advocated against using detention-first policies for undocumented immigrant families.

I am also encouraged by the National Latino/a Psychological Association’s (NLPA) recent guidelines for detention center personnel in response to the recent influx of unaccompanied minors. It is crucial that we ensure that these children, once in U.S. custody, have the services and supports they need to receive mental health screenings and culturally responsive assessments and that these guidelines are implemented. NLPA took proactive steps to address the APA Presidential Task Force on Immigration report’s recommendation to:

“Support the development and dissemination of culturally and linguistically appropriate evidence-informed practices for prevention, intervention, and treatment of mental and behavioral health problems among immigrant-origin individuals across the life span in both traditional and nontraditional settings” as it pertains to children in detention facilities (pg. 79).

When I launched this task force during my tenure as APA President (2011), I hoped it would serve as a call to action to APA members to use our psychological expertise to influence immigration reform, consistent with our Resolution on Immigrant Children, Youth, and Families. We must continue to expand upon the evidence showing the harm these detention centers can cause and advocate for policies that positively address the traumas so many immigrants face. It is also vital that APA and the mental health community continue to support and bring attention to congressional efforts to end current family detention policies. Accordingly, I would recommend you sign up for APA’s Federal Action Network to influence Congress and make sure your voice is heard!

Let’s do what is right and make the upsetting stories I mentioned earlier a thing of the past.

Melba J. T. Vasquez, PhD, ABPP received her doctorate from the scientist-practitioner counseling psychology program at the University of Texas at Austin in 1978. She is an independent practitioner in Austin. Her areas of scholarship are ethics, multicultural psychotherapy, psychology of women, supervision and training. She has provided leadership service to the profession of psychology for almost four decades.

Dr. Vasquez served as president of the American Psychological Association in 2011. She has also served on the APA Board of Directors and in various roles in APA governance, including as member or chair of a dozen APA boards, committees and task forces. She is the co-author of three books, has written more than 80 journal articles and book chapters, and served on the editorial boards of 10 journals. She is the recipient of over 40 awards for distinguished service, advocacy and mentoring.